Modern slavery exists in the UK and destroys lives. Men, women and children – UK nationals and those from abroad – are exploited in the sex industry, through forced labour, domestic servitude in the home and forced criminal activity.

These types of crime are often called human trafficking.Traffickers and slave masters use whatever means they have at their disposal to coerce, deceive and force individuals into a life of abuse, servitude and inhumane treatment.

The true extent and nature of modern slavery in Sussex is not known as this crime remains largely invisible to the general public unless they know what they are looking for.

Government guidance on Victims of Modern Slavery is designed to help staff identify and help potential victims of modern slavery (including human trafficking) in England and Wales. It reflects relevant provisions of the Modern Slavery Act 2015 and the Human Trafficking and Exploitation (Criminal Justice and Support for Victims) Act (Northern Ireland) 2015. If staff suspect a person is a potential victim of modern slavery due to human trafficking in any part of the UK (or slavery, servitude, or forced or compulsory labour in cases identified in England or Wales) they must consider a referral into the national referral mechanism (NRM). Under the NRM, a trained specialist in a designated competent authority will investigate the matter further. 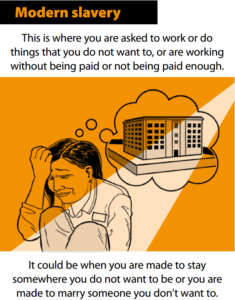 If you are concerned about an adult at risk of abuse call Access Point, the contact centre for Adult Social Care, on 01273 295555. In an emergency call 999

Send us an email